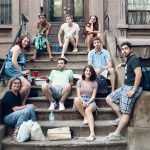 The negative perceptions of others, prejudice and racism break down social interaction in public space. The aim of this blog is to discuss the role of public space to bring about greater social cohesion. One commentator, Ash Amin, argues that public open spaces in cities are unlikely to encourage ‘inter-ethnic understanding’ because they are not ‘spaces of inter-dependence and habitual engagement’. Rather, he suggests, people are more likely to come to terms with ethnic differences in places of more regular association such as the workplace, schools, youth centres and sports clubs ‘where dialogue and ‘prosaic negotiations’ are compulsory’. Amin argues that it is the places in which we are obliged to be, combined with the opportunity or incentive for ‘banal transgressions’, which displace us from one cultural space into another, where new intercultural sociability is being formed.

Similarly, Stephen Vertovec emphasises the importance of such ‘everyday practices for getting-on with others in the inherently fleeting encounters that comprise city life’. He uses the term ‘civil-integration’ in contrast to the ‘deep and meaningful’ encounters that he feels are unlikely to occur regularly in the context of super-diversity. Amin states that public space, in its widest sense, can be an operating mode for generating a kind of studied trust in urban multiplicity and public acceptance of ‘thrown togetherness’. The acquiring and routinisation of civil-interaction to Vertovec includes ‘simple forms of acknowledgement, acts of restricted helpfulness, types of personal consideration, courtesies, and ‘indifference to diversity’. He argues, that these kinds of daily civility should be negotiated and promoted alongside wider ambitions for better relationships.

While relationships between community integration and public open spaces are not reducible to simple mechanisms, consideration of social processes is important. Intercultural understanding can illuminate the indirect role played by such spaces. Positive perceptions of public spaces, such as shopping streets, contribute to people’s decisions to stay in the area. Long-term residence and regular interaction in neighbourhood spaces have a positive influence on intercultural relations; attitudes to difference among varied groups of neighbours is improved. Therefore, the continuity of social relations over time, and the endurance of the spaces that support them is vital to building trust. With trust comes solidarity, and the growing of shared meanings and values.

According to Landry and Wood, there are key public institutions where conditions can be created for interactions without forcing actions. They claim these spaces have ‘strategic intent, careful planning, and skilled intervention to transform avoidance and indifference into engagement and co-operation’. In their view, places like museums, libraries, sports, the arts, and computer-mediated communication can be pre-disposed to being intercultural. This is because they are ‘programmed’ in light-touch ways to build on shared interests, common curiosities, active debate, disagreement, mediation and resolution. They serve to displace people from their cultural moorings, just enough for them to begin to see the world through the eyes of another, without forcing them onto the defensive.

In their study of Newham, a diverse borough of East London, Dines and Cattell illustrate that certain public spaces support culturally-based networks and promote a sense of pride. A key factor is how these spaces are perceived and valued. Unstructured cultural interactions provide experience and increase tolerance because they are unthreatening. They are spaces that harness the potential for maintaining and improving inter-cultural relations as sites where people, under the right circumstances or with the necessary encouragement, might come together. As everyday settings they offer a wide range of interests and attachments to place.

Dines and Cattell highlight the importance of key spaces that were valued by different cultures, including:

What this study shows is that those public spaces perceived to be of value gave diverse people the choice to undertake different degrees of ‘togetherness’ in the context of everyday, ordinary, routine activities. They were motivated by different needs. Most of all, the study emphasises that interaction can never be forced or false. It takes time to achieve familiarity as it is about people’s habits in their public behaviour. It is the potential of these everyday spaces that needs to be harnessed. Their daily movements and interactions should be enjoyable and stimulating. Therefore, any spatial interventions should be about improving the conditions and circumstances for these intercultural interactions to take place. For example; improving the physical conditions at the school gate or bus stop to widen pavements, or adjusting a market’s management regime. These are both interventions that take small steps, and start with people’s existing behaviour and preferences.

Feeling safe and secure in a space is a vital precursor to fostering trust and encouraging new uses. Signs of crime and vandalism communicate disrespect and lack of care for residents. Until these are tackled, interventions aimed at more sophisticated integration goals will have only limited success.

Policies can also support the emergence of new communities or their continuous adaptation. Through spatial or activity-based interventions, local communities can be connected. They can open up and friendships can be established. In some neighbourhoods this has included the establishment of a joint vegetable gardening club, collective recycling, participation in neighbourhood radio or television channels. Exchanges occur between institutions or groups such as schools and theatres as well. These types of activities can lead to the sharing of concern and the creation of new networks of social capital. The focus is on citizen-led community-building approaches. Social innovation in public spaces galvanizes the public to get involved. Civic action around issues of common interest, provides the emotional and intellectual outlets needed to help people form better relationships. Several commentators stress the importance of civic action. Landry and Wood, in particular, write extensively on the Intercultural Practitioner for which they list a new skills set:

Policy-makers and practitioners working in diverse areas, and particularly when designing and managing public space, need to balance the seemingly contradictory cultural priorities of different communities. How are their different cultural values reflected in public spaces? In a report commissioned by the Commission for Racial Equality, Lownsbrough and Beunderman conclude four key recommendations:

The focus is clearly not on the design challenges of public spaces alone. As we know, cosmetic interventions in public space such as new paving, elegant street furniture and improved lighting alone do not encourage underperforming public spaces. Businesses fail, traffic dominates and anti-social behavior takes place in these spaces. What an intercultural approach to public space requires is that people are given the voice and opportunity to develop a shared future. Each individual feels they have something to contribute in shaping, making, using, and co-creating a shared space.