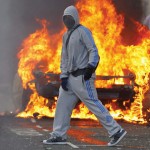 In my book ‘Bridging Cultures: the guide to social innovation in cosmopolitan cities’ I focus on how public spaces can provide opportunities for social encounters and cross-cultural exchanges. Yet we all know that public space is also contested. The recent London riots that spread nationwide in 2011 was a clear demonstration of angry youths taking to the streets to protest. On the news, we hear about gangs fighting over territories. Youths create social and economic solidarity in response to their marginal positions in society. In the post 9/11 world we are acutely aware of hyper security and surveillance. It limits our movement and freedom of self-expression. We also know that public space has increasingly excluded certain groups of people in society. Skateboarders, the homeless, poor people who can’t afford the café culture, women, children, prostitutes are some of the excluded groups. Therefore contrary to popular belief that public space is democratic, open and inclusive, public space is also politically, socially and economically biased.

In many instances, public spaces are regulated by unofficial rules established by those in perceived power (‘white’ people in the case of the UK). The perceived superiority between different groups of people is at the root of many conflicts in public space. Racism and prejudice play a significant role in breaking down social interaction. They are based on myths and stories people have of others. The unconscious breaking of rules – the parking of a car in the wrong space, the inattentive disposal of rubbish, the lack of care for a front lawn – lead to people being ostracised or sometimes harassed. These unwritten rules and social norms not only serve to maintain a sense of order but are often used to legitimise prejudices against certain groups on cultural rather than racial grounds. For cultural minorities, public spaces can make them feel excluded because of additional deterrents created by unfamiliarity and fear of hostile or discriminatory behaviour. Such fears are corroborated and reflected in the 2003-04 crime figures which show, for example, that there were 4,179 prosecutions for racially aggravated crimes, of which 1,056 were assaults or harassment.

These types of conflicts tend to happen in the residential areas where there is a clearer distinction between ‘insiders’ and ‘outsiders’ than in places such as the general market where there is a greater sense of ownership over space. The perceived intrusion of outsiders could lead to tensions. In resolving issues of racism and prejudice, a raised awareness of different cultural norms and more open conversations are required.

Other forms of prejudice against young people is a recurring theme. Today, Anti-Social Behavior Orders against young people represent the mistrust adults have of young people ‘hanging out’. With most young people spending their time in public space, this creates tensions. Some adults perceive large numbers of youths as a threat and avoid or tolerate them, whereas others take a more confrontational stance. The perception that young people are ‘trouble makers’ is largely down to the negative stereotyping that has defined neighbourhoods. The ‘reputation effect’ is exacerbated by the limited experience and mobility of people outside their own neighbourhoods. So while decrying some areas as being unsafe, external observers are projecting irrational opinions on neighbourhoods. These irrational ‘beliefs’ have proven to lower life chances. Many commentators point to the structural inequalities that face young people today as the root cause to much of the neighbourhood-based ‘gang turfs’. In itself, turfs are not necessarily racially focused – often it is merely an expression of neighbourhood attachment taken to an extreme. To a degree, turfs should be recognised as an inherent aspect of young people’s lives. It only becomes problematic in combination with other forms of deprivation and negative behaviour. Neighbourhood gangs as well as segregated communities are thus examples of the danger of ‘bonding social capital’ of the wrong kind. Too much belonging leads to the creation of clear turfs and psychological boundaries. In resolving conflicts, therefore, issues of inequality and marginalization require addressing.

To counter the preconceived opinion that is not based on reason or actual experiences between people of different races, cultures, genders, sexuality and generations, the need for openly talking about differences is required. This will open up a space for resolving conflicts. Greater cross-cultural understanding will result. It is also an opportunity to address some of the underlying structural issues that lead to conflict, many of which are related to economic marginalization and access to resources. It’s a good place to start a conversation.

Spatially, access to housing, public space and community facilities are key urban resources. In many regeneration schemes and housing estate improvements, new development is inward-looking. Facilities are centrally located. Housing is separated according to socio-economic incomes. Richard Sennett describes the failure of a project in which he was involved in. He speaks about how ‘boundary thinking can miss opportunities’. Tasked with the creation of a new market (La Marqueta) in Harlem, New York; ‘we planners chose to locate La Marqueta in the centre of Spanish Harlem twenty blocks away, in the very centre of the community, and to regard 96th Street [where Harlem changes into a very wealthy area – the Upper East Side] as a dead edge, where nothing much happens. We chose wrongly. Had we located the market on that street, we might have encouraged activity which brought the rich and the poor into some daily commercial contact. Wiser planners have since learned from our mistake, and on the West Side of Manhattan sought to locate new community resources at the edges between communities, in order to open the gates between different racial and economic communities. Our imagination of the importance of the centre proved isolating, their understanding of the value of the edge and border has proved integrating.’

This is by no means easy. The problem with segregation and zoning is exactly its entrenchment and embedding in daily routines, as well as mental maps. Other examples include transport links that provided invaluable access for poorer residents on the outskirts of cities. Transport provides access to resources and services in the commercial centre. The point is that spatial layout and access to resources, such as public space, are fundamental to blurring the boundaries of inequality.