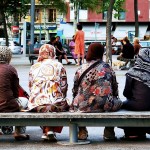 In 2006, a heated debate flared up after Jack Straw, ex-foreign secretary and MP for Blackburn, had asked a Muslim woman to remove her veil while she was sitting in his constituency office. Over the past decade, the veil has been used as a persistent symbol of female oppression and lack of integration in European society. What didn’t occur to Jack Straw and commentators at the time, was that this veiled Muslim woman was in fact exercising her democratic right to consult with her MP, and in his public office.

The division between public and private space, both physically and legally, is about understanding the extent to which an act or behaviour affects society as a whole. Public space and public law governs the relationship between the person and the state, and private law governs the relationships of individuals. In Islam, and particularly for Muslim women, the distinction between public and private spheres of life is very important. In the private spheres of life, that is in the home, the veil is not worn. Women can freely mingle with male members of the family household with which they are directly related. However, in the more public spheres of life, including in the more public zones of the home and the city, the veil allows for women to freely engage with society as if she was in a private space.

In my workshops engaging with Muslim women in the design of their home, we collaboratively produced a design brief based on their cultural values. Women spoke of the importance of the kitchen and back rooms as spaces for family gatherings. For them, the front room, played a similar role to the traditional English parlour, a place to greet guests. This back and front divide is a representation of the private/public space divide. To extend a woman’s freedom to actively socialise with people not related to her, the headscarf and veil offer her the scope to be visible in society. The Muslim woman sitting in Jack Straw’s office was precisely making that point. She had left the private sphere of her home to participate democratically in society. To be asked to ‘look a certain way’ was to diminish her freedom of choice and self-expression, and to not acknowledge her presence in a democratic and public space.

A lot can be said of the interpretation of the veil and headscarf in British society as an impingement on public law, and by extension the relationship of Muslim women and the state. The recent remarks by the Prime Minster claiming that 22% of Muslim woman speak little or no English is a sign of segregation, substantiates the common portrayal of the victimised Muslim woman. However, when speaking to Muslim woman directly, their experience is very different. For these women the headscarf and the veil is a symbol of their piety, modesty, autonomy in public space, and freedom of self-expression. The question is do these 22% of women find a need to speak the language? I would argue that the lack of acceptance and hospitality rife in British society, because of the commonly-held misperceptions, has forced Muslim women to remain within their communities.

In my book, Bridging Cultures, people who prefer to network with people like themselves do so because there is scope for mutual social, emotional and economic support. Many of these Muslim women work in family businesses and support the family in the home. I recognise the value of this form of networking, or bonding capital, for the well-being and sustainability of a minority culture. Nonetheless, I also argue for bridging capital, where social networks are built between cultural groups. However, for bridging capital to exist, there are certain conditions that support it. For one, there has to be a dispelling of myths and prejudices that seek to alienate segments of our society on the grounds ‘they don’t look or behave the same’. Liberal democracy is about respect for other cultures and religions. To uphold one of the core principles that of diversity: it means we show respect for difference. A fair and just society for all is built upon the foundation of upholding the rights of others even if we disagree with, or dislike the choices that they may make. This means if women can chose to wear as little as they like then they should also be able to choose to wear as much as they like. Like other women, Muslim women should also have the independence to choose to wear what they want.

Another condition is the acceptance, respect and tolerance required for all members of society to co-exist in the public spaces of the city. All members have equal right to be present and access public spaces without fear of judgment or denial of legitimacy. In my opinion, for Muslim women to integrate into British society, British society would need to integrate Muslim women by recognizing them as equal citizens, capable of finding ways to occupy public spaces and exercise their rights with freedom and ease.